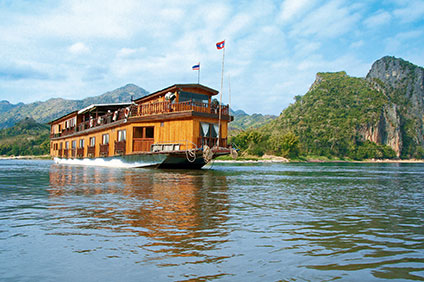 The Yangtze in China is famous for its cruises between Chongqing and Yichang which include the new Three Gorges Dam. The cruises are generally included in longer cruise tour packages and key operators include Viking Cruises, Victoria Cruises and Orient Royal Cruise Co.

The Mekong hosts cruises between Siem Reap (Angkor) in Cambodia to My Tho, the port for Saigon, in Vietnam.

The River Kwai in Thailand offers cruises upstream and downstream from Bangkok. The cruises offer a chance to study the history of WWII and see the conditions of prisoners on the notorious Burma railway. In contrast the cruises visit to old temples and give passengers the chance to see Thai life along the river.

The Irrawaddy (Ayeyarwady) River is Myanmar's (Burma’s) largest river. 1350 miles long, it dissects the country from north to south and empties through a nine armed delta into the Indian Ocean. In colonial times, before railways and automobiles, the river was known as the "Road to Mandalay” which is the name of the ship that Orient Express use to offer cruises between Bagan and Mandalay

All cruises are on River Boats and these can range by style from luxury 5 star boats on the Yangtze that can carry up to 300 passengers to small river boats that carry between 20 and 60 people on the River Kwai and Mekong. All these river cruises allow passengers time to visit the sights along the river.

Cruise season
Cruises operate year round on the Mekong, Kwai and Irrawaddy rivers but don’t operate in the middle of winter on the Yangtze (November to March)

Weather
The Mekong, Kwai and Irrawaddy are all located in the Southeast Asian monsoon belt.. The rain mostly falls in May to October when temperatures and humidity are higher. The cooler drier months are from November to March and travel in these times is more pleasant.

Yangtze cruises are further north and here the weather gets quite cold in the winter months from November to March when cruises don’t operate. Through the middle of the year temperatures are in the mid to high 20’s.

Find a cruise for Asian Rivers